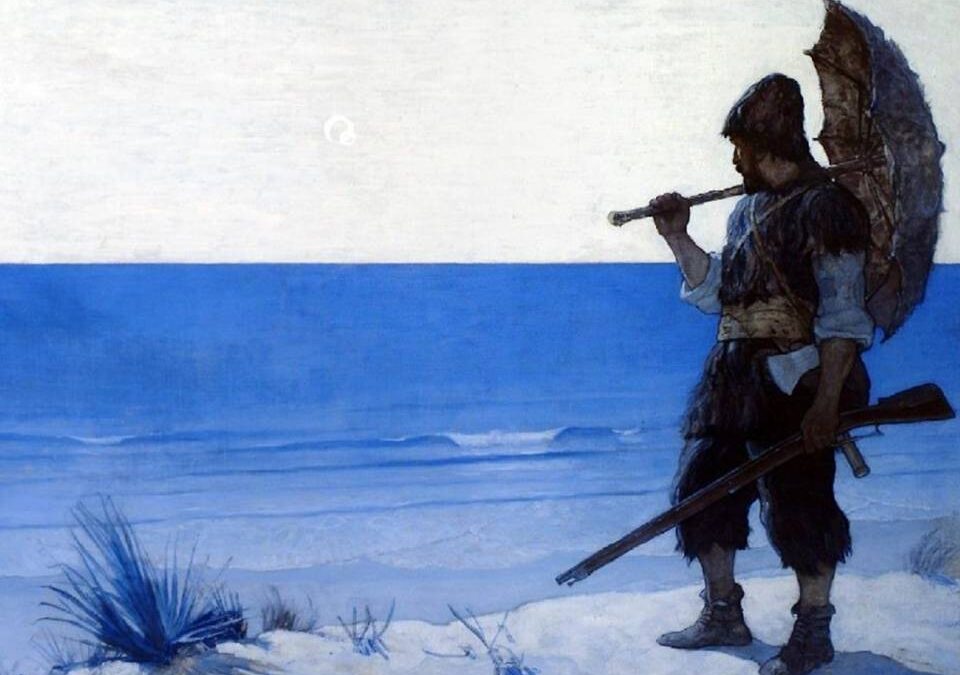 Robinson Crusoe is a young Englishman with a single passion: sea travel. On one of his travels she was surprised by a storm. Robinson managed to save himself by reaching an island, where he had to face a long stay.

The new hero belongs to the middle class. The middle state” which his father praises as “the best state in the world, the most suited to human happiness, not exposed to the miseries and hardships, the labour and sufferings of the mechanic part of mankind, and not embarrassed with the pride, luxury, ambition, and envy of the upper part of mankind”. What Robinson has in common with the classical heroes of travel literature is his restlessness, the search for his own identity in alternative to the model provided by his father. Actually the story begins with an act of transgression, of disobedience which piaces the character in a situation of separation that will culminate with his isolation on the island after the shipwreck.

The setting of most of the story is functional to its ideological meaning. First of all, the island is the ideal place far Robinson to prove his qualities, to demonstrate that he deserved to be saved by God’s Providence, his God being the God of the puritans who wants his chosen people to do their best to increase the gifts He has given them. Secondly, on the island Robinson organizes a primitive empire, thus becoming the prototype of the English colonizer: his staring on the island is not seen as a return to Nature, but as a chance to exploit and dominate Nature.

THE INDIVIDUAL AND SOCIETY

Finally, the hero’s life on the island puts forward the issue of the relationship between individual and society, between the «private» and the «public» spheres. The society Robinson creates on the island is not an alternative to the English one, on the contrary it can be read as an exaltation of 18th-century England and its ideals of mobility, material productiveness and individualism. Defoe shows that though God is the prime cause of everything, the individual can mould his destiny through action. Man can overcome doubt and modify reality through his work and through the interpretation of his achievements in the light of the Bible and God’s will. The Puritan element is not simply present in Robinson’s relationship with God, but also in his pragmatic and individualist outlook. The rigorous method he applies to every situation also reflects the teachings of the new science of Galileo and Bacon. In fact, he always starts observing the situation, then he makes a list of all possible solutions, he considers the pros and cons and he chooses the best alternative.

<<June 28. Feeling a little stronger, I ate some turtle meat This was the first lime in my lire I asked God’s blessing on what I ate. Afterwards, 1 took my gun and walked to the shore. There 1 sat down, feeling weak once more, and looked out at the sea, ‘What,’ I asked myself, ‘is this earth and sea of which I have seen so much? What am I? What are men and beasts? Mere do we come from? Surely we are made by the same secret power that formed the earth and sea. Who is that?’ The answer was clear., ‘God made it all.’ Then I thought, ‘if God made all these things, Re must also guide them all. Nothing can happen in creation without His knowledge. Therefore, He knows that I am here in this miserable condition, and he meant these things to happen to me.’ ‘Why has God done this to me?’ I asked myself. But then I remembered my wicked life, and I said to myself, ‘Why do you ask why God has done this to you? Ask instead why you were not killed long ago’

Sadly disturbed by these thoughts, I went to my chest to look for some tobacco. There 1 also found the Bibles I had taken from the ship. I took one of the Bibles and began to read. The first words I saw were these.- ‘Call on me in the day of trouble, and I will deliver you, and you will praise me.’ The words were very relevant to my situation, and I often thought about them afterwards. Before going to bed, I knelt down and prayed to God, I asked him to fulfil the promise of the Bible and deliver me. I had taken rum and tobacco, so I feel asleep and did not wake up until about three in the afternoon of the next day. When I awoke I was refreshed and cheerful.

July 3. I thought often about the words in the Bible, will deliver you, but it seemed impossible that I should escape from the island, Then suddenly I said to myself, ‘But I Have been deliveredfrom my illness!’ God had delivered me, but I had not praised Him. Instead of thanking Him for saving my life, I had, thought only of escaping from the island.

July 4. I began to read the Bible seriously. I decided to read a little every morning and every night Now I understood the words ‘Call on me, and I will deliver you’ in a different way. Before I had asked to be delivered from my island-prison. Now I asked to be delivered from the guilt of my sinful past. Deliverance from sin is a far greater blessing than deliverance from misery. My mind was now calm and comforted. I had been on this unhappy island far more than ten months. I believed that no human being had ever come here before, I was lord of the whole island. If I liked, I could’ call myself king or emperor. I had enough wood to build twenty ships, enough food far an army.