It is a city when old and new blend together.

London is the capital of the United Kingdom and one of the biggest cities in the world.

Its position on the River Thames has turned it into an international port and a centre for finance, industry, arts and government.

The City of London was the original site of London and is now Londons financial district.

In the City there are: the Tower Bridge, which can open to let the ships pass; the Tower of London, an old building which was a royal residence and a prison, and now is a museum. In it there is the famous collection of the Crown Jewels; the British Museum, which houses many important monuments and documents; and St. Pauls cathedral. A famous street is Portobello Road, an open-air market.

The City of Westminster has gradually become the new heart of London.

Here youll find: the Westminster Abbey, a beautiful church which contains many tombs; the Houses of Parliament, with their famous clock Big Ben; Buckingham Palace, the residence of the Queen; Trafalgar Square, an important place, famous for the statue of Admiral Nelson and the National Gallery. Not very far there is Piccadilly Circus, where there are a lot of shops, especially in Oxford Street.

To the west there is Knightsbridge, with its famous store Harrods.

London is very rich in park, the largest park is Hyde Park. 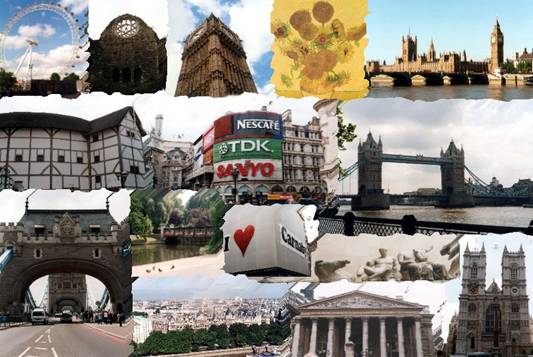