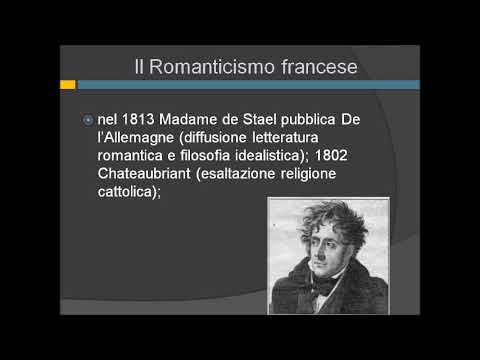 In the last thirty years of the 18th century Romanticism presented itself as a reaction against the faith in reason.

It promoted instead feelings and emotions, contained elements of introspection, nostalgia, emotionalism, individualism, and led to a new way of considering the role of man in the Universe.

Immagination gained a key role as it gives expression to emotional experiences not accountable to reason and to the willingness to explore less concious aspects of feeling.

Great emphasis was placed on the individual: the romanticism exalted the solitary state, the atypical, the rebel, the outcast.

This attitude led to the cult of the Hero and consequently to the view of society as an evil force (this concept is influenced by Rousseaus thought).

The country was revalued as a place where mans relationship with nature was still intact, in opposition to industrial towns.

Nature was no longer seen as something which man could rule by reason, but as a real living being.

The taste for the desolate (ruins, castles, abbeys) and for the exotic (from Rousseaus thought) were the most wellcomed? scenaries in contrast to the present reality. The romantic was interested in the remotest parts of Europe as strange and umpredictable places.

It was interested in humble people, in the art and popular traditions of the MiddleAges that manifested itself in the so-called Gothic vogue” (interest in wild, irrational, supernatural, horrific).

Childhood was better considered as children, in romantic mind, are purer than grown-up people, because they are unspoilt by civilisation.

Settings: the interest in rural life is usually set in unspoilt nature often gloomy, nighty and dark. What is more, cemeteries and ruins are considered suitable for meditation.

Style: the tone is melancholic and sad, and the poetic form respects classical proportion (use of inversion, allitteration, apostrophe).

Poets and works: the most important works were Ossianic” by James Macpherson, which is a cycle poem by a legendary irish warrior of the 3rd century and most of all the Elegy Written in a Country Churchyard” by Thomas Gray, which belongs to the trend of Graveyard Poetry; here the tomb become a symbol evoking the contemplation of death and immortality.

Themes: the presence of the lyric I” is an important feature. Nature is considered as a living force that, in a pantheistic vein, is the expression of God in the Universe.

Style: the poet search a new individual style using, on the one hand, past forms such as ballads, sonets, lyric poems (which achieved freedom, flexibility and intesity); on the other hand, poetic techniques free from models and rules. They also use a language of sense impressions and symbols and images as visible vehicles of a visionary perception.

Trends: the Lake poets” belong to the first generation (Wordsworth and Coleridge wrote together the Lyrical Ballads”); among the second generations poets the most important are Byron, Shelley, Keats.

Genre and context: the G. N. was a development of the Sentimental Novel. Though emotionalism gains a key role even in this kind of novels, the most important feature is the presence of fear, suspance and, sometimes, supernatural, wich reflect the increasing disillusionment with Enlightenment rationality and the bloody revolutions of this historical period.

Name: the adjective ‘Gothic was first applied to architecture; when Horace Walpole subtitled his novel (The Castle of Otranto”) with the phrase ‘a Gothic story, the term began to connote this kind of literature.

Themes: terror and horror are very important; the former is characterised by obscurity and uncertainty, the later by evil and atrocity.

Characters: in the Gothic novel there are a heroine, a passional and scared beautiful girl, a hero, a sensitive and honorable man, and a villain who is a satanic and perverted male character. There are also supernatural beings such as vampires, ghosts, monsters and witches.

Settings: the settings are typical of romanticism; nature reflects the atmosphere of fear becoming gloomy and dark: the night is the favorite setting. The places are chosen among ancient buildings such as castles, abbeys, convents, all full of secret passages, rooms or dungeons.

Novels and Writers: the first Gothic novel is The Castle of Otranto” by Horace Walpole, followed by The Mysteries of Udolpho” by Ann Radcliffe, The Monk” by M. Lewis and Frankenstein” by Mary Shelley.

THE NOVEL OF MANNERS

Social setting: they are usually set in the upper and middle society, often in the country. The stories take place during visits, teas and balls.

Theme: the premise is the relationship between manners, social behaviour and character; personal relationships are linked to the difference between social classes. They usually deal with marriage, complicatytion of love and friendship.

Style: the novels are usually in third-person narration, dialogue are very often used (a great importance is given to the different ways of speaking); the irony is very important and passions and emotions are not expressed directly.

Historical premise: the H. N. appears at the beginnig of the 19th century and it is strictly connected with the Napoleonic wars wich awoke national feelings and gave impulse to the search of a national identity. The writers aim is to show the closeness of the past to the present.

Setting: the stories take place in a well defined historical context (credible characters both invented and real) and consequently the description of manners, buildings and istitutions is very detailed to increase the verisimilitude.

Style: it is used the third-person omniscient narrator, and there are very frequently flash-backs and time-shifts in order to follow the adventures connected with the different characters.